Pure smut. Hanna finds ecstasy on the wildest bus ride of her life. But even when she’s finally free of the cloud’s grasp, another first still lies ahead.

The cloud surrounded Lawrence, barely visible unless you knew it was there, pulsing and undulating. Hanna saw it clearly. Jack slid himself from her and moved back to his seat, his chest still heaving from the intensity of his orgasm and his cock still as hard as when they began. For that matter, so was Paul’s, despite the large deposit he’d recently made in her mouth. She could feel Jack’s starting to leak out, feel it running down her thighs as she wiggled her backside at Lawrence.

“Come on, please? I need more. I need that big, fat cock inside me, please!”

“Reach back and spread that pussy for me, then.” Lawrence said, his deep voice thick with arousal.

Pressing her face to the floor, Hanna reached back with both hands and spread herself as wide as she could.

Lawrence knelt behind Hanna, sliding the tip of his cock up and down her drenched slit, barely prodding her opening.

“You’re still fucking dripping from my buddy fucking you and you want me next?”

Lawrence pressed the tip of his huge cock to her hole until it popped in, causing Hanna to yelp. He chuckled.

“Somebody might wanna fill her mouth again.” He commented, eying his friends.

“I wanna suck the one that just came inside me.” Hanna whimpered.

“You want to clean my cock with your mouth?” Jack asked, standing and moving in front of her, still raging hard.

Hanna pushed herself up, a little more of Lawrence’s massive erection sliding in as she did. Jack knelt, his cock still glistening with their combined juices, grinning when she licked her lips.

Hanna wrapped her lips around Jack’s tip, still puffy from Paul’s rough treatment of her mouth, lapping at him with her tongue. His hand on the back of her head didn’t force her down, merely kept her from pulling away as their combined scents filled her nostrils. Behind her, Lawrence took hold of her hips, pressing himself into her little by little.

Jack had been large, but Lawrence truly felt like he would split her in half and Hanna found herself surprised by how much she loved it. As the cloud took more of their self-control away, Jack’s hips began to move, his hand pressing on her head. By the time Lawrence buried himself in her tight hole completely, Jack was thrusting into her mouth as he had her pussy minutes earlier.

“Fuck, your throat’s even tighter!” He groaned, pulling out for just a moment.

Hanna wrapped her lips around him once more and Jack set to fucking her mouth hard and fast. Lawrence reached down to spread her open with his thumbs, starting to move inside of her. The combination of the fullness of his cock in her pussy and Jack’s hard, deep thrusts in her mouth sent Hanna hurtling towards another orgasm without ever touching her clit. Suddenly, all she could think about was having Paul inside of her too, and there was only one place left for him. When Jack backed off to let her breath for a moment, the words tumbled out.

Lawrence stopped, all three of them momentarily stunned.

“You want somebody in there while I’m fucking your pussy?” Lawrence asked.

The three men grinned at each other. Lawrence pulled out of her quickly, laying down on the floor of the bus with her sweatshirt under his head. Hanna scrambled to straddle him, but Paul stopped her before she could take his cock again.

Kneeling behind her, Paul slid himself into her soaked core, pumping for several minutes before pulling out again, spreading some of it over her puckered hole. Hanna reached back and positioned Lawrence’s cock at her entrance, groaning as she slid down until it filled her completely. Lawrence pulled her down to his chest, his strong arms holding her tight as Paul spread her cheeks apart. He pressed against her until the tip popped in, causing Hanna to scream.

“You sure you want this?” He asked, barely holding onto control.

“Yes! Fuck yes! Just shove it in, please!” Despite the pain, Hanna needed to be filled more than she’d ever needed anything.

Lawrence turned her head, kissing her passionately to stifle her screams as Paul did as she asked, thrusting into her back passage in one swift movement. Pain radiated through her, yet she didn’t want them to stop. If anything, she wanted more. The cloud had claimed whatever control she had left. Hanna’s hips began to move against them, feeling their hardness pressing against one another through her thin inner wall. Tearing her lips from the kiss, she let out a long, shuddering moan.

Standing again and balancing himself with one hand on a seat, Jack said,

“Open up, gorgeous, you’re not done with mine yet either.”

Jack filled her mouth again, the first to begin thrusting into her eager body. The other two took a few minutes to find their rhythm and when they did, it was bliss. Her lips were tight around Jack’s cock, her tongue eagerly lapping at it when she could, her pussy stretched around Lawrence and Paul barely able to move from the grip of her ass. Hanna quickly became delirious from the pleasure. The other passengers on the bus stared, transfixed by the scene in front of them.

After a few minutes, Hanna’s body relaxed, allowing Paul and Lawrence to move without fear of hurting her. It wasn’t long until she was taking long, hard strokes from all of them, a series of intense orgasms coursing through her as they plowed her eager body. Her breasts bounced as much from the impact of their thrusts as the movement of the bus, her eyes watered and a light sheen of sweat covered her body. Hanna could feel the eyes of the other passengers on her, the knowledge of being watched intensifying her pleasure. She didn’t want it to end.

Barely capable of coherent thought, Hanna lost herself in being used by the three strange men, in the sensation of their cocks filling her. Under the spell of the strange cloud, she wasn’t the only one to reach multiple climaxes. With each time they filled her with their seed, Hanna wanted more. When the cloud finally released them and she was able to stand, she felt it begin running down her legs instantly. Hanna found her discarded clothing and tugged it back on with clumsy hands before stumbling off at the next stop. Exhausted, she collapsed on the nearest bench and tried to get her bearings.

“Hey, gorgeous.” A familiar male voice said from behind her.

Turning, Hanna saw Jack standing there, smiling at her.

“Did you mean to get off at this stop?”

“My car isn’t far from here. How about I give you a ride? It’s the least I can do after, well, you know.”

“That would be amazing, thank you.”

Even without the influence of the cloud, Hanna felt a dull throb under the now soaked crotch of her jean shorts when he smiled at her and offered a hand to help her up.

“What’s your name?” He asked, picking up her backpack before she could.

“Jack. I’d say it’s nice to meet you, but that somehow doesn’t feel right.” He chuckled.

“We did meet under strange circumstances, didn’t we?” She felt her face turning red.

“I don’t mind.” Hanna said in a sheepish tone.

“I’m glad. It might be a little weird to ask this after what just happened, but, would you like to go out sometime?”

Hanna paused mid-step. She’d had a lot of dates in the last couple of years, rarely more than two with the same person and none that she’d had any strong desire to go on. But when he asked her, it felt different.

For more from The Kissing Cloud, check out the links below!

The Arrival Of Lust 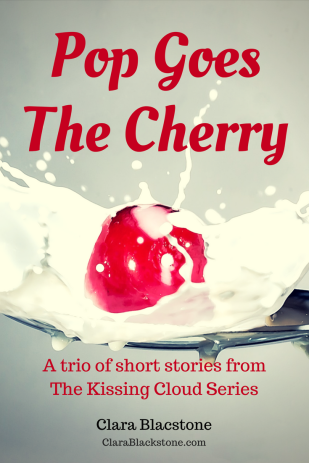