Pure smut. Wildly aroused by the sight of her husband submitting to her, Sharon takes the pleasure she’s needed for so long and discovers Bret’s enjoyment of pain.

The cloud danced just above the floor, draining their inhibitions little by little though neither of them noticed it. All they could see was each other, passion burning hotter than it had in longer than they could remember. Bret’s tongue pressed against her folds as he ran it slowly from bottom to top, her juices coating his tongue, his lips, his chin. Opening her eyes, Sharon looked down, marveling at the sight of him on his knees in front of her.

“Mmhm!” He responded as best he could with his mouth otherwise occupied.

“Good, because you’re going to be doing this a lot. Now, wrap your lips around my clit and suck. Mmm, like that, yes!”

Bret suckled hard on her throbbing nub, flicking his tongue over it at the same time, pushing Sharon closer and closer to the edge. Her legs starting to weaken, she braced herself on the counter.

“Why don’t you put one of those hands to good use and see if you can find my g-spot?” Sharon managed in between moans.

His eager fingers fumbled for a moment, struggling to find their target through her wetness and eliciting a deep moan when the first slid in. With a little firm direction from her, after a few minutes Bret found the sensitive spot and began pressing it rhythmically, his lips still tight around her nub. Sharon wasn’t sure if she could remain standing and at the moment, she didn’t really care.

Closing her eyes, she pictured the secretary Bret mentioned – as much as she could, having never met the girl – laying on the floor under Bret, his cock in the girl’s mouth while he pleasured her, his wife. Sharon threw her head back and let out a loud moan, her entire body trembling.

The insistent pulsing of his fingertip paired with they way he alternated between sucking her clit and flicking it with his tongue pushed Sharon over the edge. Her juices flooded his face as the orgasm hit, her legs barely able to support her as her screams echoed through their house. Bret didn’t let up for a second, not until she nudged him away in order to catch her breath. When her eyes finally opened again, she looked down to find him still kneeling, waiting patiently for her next command, his cock standing at attention.

“Mmm, I bet you’d love to stick your cock in my pussy right now, wouldn’t you?” She murmured.

“Yes, Ma’am, I would.” His hazel eyes were dark with need.

“Not yet. No, I’ve got other plans for you. Stand up, legs spread, hands behind your head.”

Bret obeyed, his magnificent cock bouncing as he moved, twitching with desire even when he stood still. Sharon went to the drawer next to the refrigerator and retrieved two of the clips she kept for chip bags, returning to stand in front of him. Bret’s eyes went wide when he saw what she held. With the tip of her tongue, Sharon teased Bret’s hard, pink nipples for a moment before capturing first one, then the other in the unforgiving clips. Bret howled in pain.

“Aww, does that hurt?” Sharon gave him a wicked, gleeful look.

“Good. Do you like it, or would this be suitable punishment for neglecting your wife?”

“Hmm, maybe I should invest in some toys, then. A little extra incentive for you to be a good boy. Would you like that?”

“Good. In the meantime, I’ll just have to make do with what I have.”

Sharon picked the spoon up again, Bret swallowing hard as she ran it across his chest and down his stomach, stopping just above his erection. Without warning, she began tapping it along his length just hard enough to send small jolts of pain coursing through him. Bret bit his lip, doing his best to remain quiet.

“You’re so proud of this cock, yet you haven’t used it to pleasure your wife in a very long time. Is that the proper thing to do, Bret?”

“Mm, that’s right. Instead, I bet you’ve been jacking off thinking about that sexy little thing at work, haven’t you?”

Bret couldn’t look at her.

“Haven’t you?” She repeated, her tone growing more stern and the tapping of the spoon becoming harder.

Bringing the spoon up, Sharon suddenly swatted off the clip on his left nipple, causing him to howl in pain and surprise. She didn’t pause for even a second before swatting off the other. Under the top of the apron, her own nipples were like pebbles, aching and throbbing with her arousal. Desire dripped down her legs.

“Pick up the clips and put them back on your nipples.” She ordered, leaning back against the counter.

Bret hurried to obey, wincing as the cruel plastic dug into his tender nipples once more.

“Good boy. Now, back on your knees and fuck me with your tongue and fingers.”

“May I suggest something, Ma’am?” He asked, his voice soft and deferent.

“Why don’t you lay down somewhere so you may be pleasured without worry of falling?”

Sharon smiled softly at him.

Sharon looked around, her eyes finally settling on the kitchen table. If he knelt up rather than sitting on his heels, she figured Bret could still obey her commands. Sauntering across the room to the table, she could feel his eyes on her shapely behind, feel his desire even at a distance. Sharon lay down on the smooth wood of the table, her hips right on the edge, propped up on one elbow and pointing at the floor between her legs with the other hand.

Bret rushed to her, kneeling and looking up, waiting obediently.

Parting her slick folds with one hand, Bret circled her hard clit with his tongue before dipping lower to slide it in where his finger had been not long before. In a few short moments, he found a good rhythm, sliding his tongue in and out as he wished he was doing with his cock. With two fingers on his other hand he rubbed small, slow circles on her nub, reveling in the way she moaned from his attentions.

Sharon lay back on the table, eyes closed, her own hands coming up to knead her breasts, rolling her aching nipples between her fingers. Beneath the table, the cloud swirled, becoming more opaque as it fed on their discarded inhibitions, fueling their lust. Swatting his hand away, Sharon took over rubbing her clit as a second orgasm approached rapidly.

“That’s it, good boy! Mmm, don’t stop! Fuck me with that talented tongue, Bret!” Sharon moaned, propping herself up slightly to be able to see him.

Bret shoved his tongue in as deep as it would go, moaning against her folds.

“Yesss! Ohh, you want me to come all over your face, don’t you?”

Bret nodded, pleading with his eyes. It was unbelievably hot seeing her strong, powerful husband so eager to please, so subservient to her. In mere moments, Sharon was shaking and writhing with a second climax, his tongue pumping into her, his fingers taking over rubbing her clit when her own hand fell limply to her side. She didn’t even care when he moved to tongue her clit, pressing two fingers into her body and fucking her hard with them. Sharon screamed and moaned, gasping for air in the precious seconds between orgasms. Only when she was shuddering and incoherent did Bret stop, sitting back on his heels to wait for her to come down.

His cock pulsed and twitched, aching to be touched. Bret sat on his hands to keep from giving in to the temptation. He knew he was already in trouble for coming home so late night after night, and he wasn’t eager to find out what she would do if he touched himself now. Still, as he stared at his wife’s body wracked with aftershocks, her soaked pussy still fully exposed to him, he couldn’t help imagining being buried inside of her. All Bret could do was wait and silently pray she would grant him release.

For more from The Kissing Cloud, check out the links below!

The Arrival Of Lust 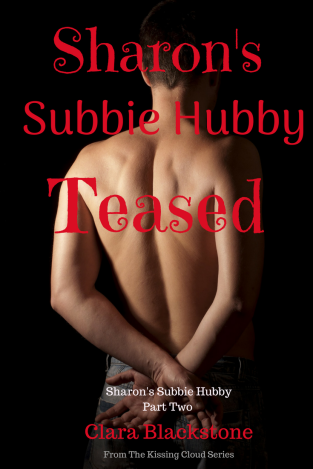